Most teenagers will go through phases, often picking up traits or behaviours from their peers or close friends. Often these phases are harmless and will chop and change as they age, however, there are some things that teenagers will do that may not necessarily be a “phase” and can often be signs of Obsessive Compulsive Disorder. Described as a condition that those who suffer from it experience unwanted feelings of repetitive urges, impulses or compulsions, Obsessive Compulsive Disorder (OCD) affects 1.2% of the population and here we count down 9 ways that a teen may be showing signs of OCD. 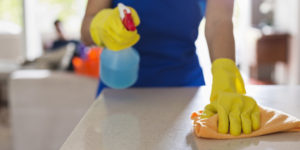 Some people who suffer from obsessive compulsive behaviour disorder can often fall under the category of a “washer” which is someone who has a compulsion to constantly clean, even if it’s the same spot over and over again. Although cleaning can be used as therapy for someone with OCD, the urge to continue cleaning generally resurfaces shortly after completing the task and can some times be even more powerful than the previous urge. Knowing when to seek help is important, and if you notice a teenager is constantly cleaning for hours at a time, day after day, then this could be a sign of obsessive compulsive disorder and they should seek help.