Women are from Venus, Men are from Mars, well that’s what they say, so it’s little wonder we have trouble understanding each other. Ever been in a situation where you’re unsure if she likes you? Or whether or not she’s completely out of your league? Well, hopefully these 10 Signs that she’s not into you will give you at least a small helping hand in knowing.

10. Not responding to your calls/texts 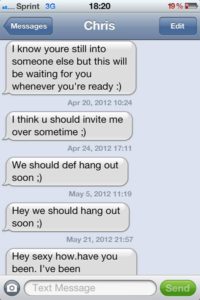 I guess you could say this one is quite obvious, or is she really that busy? Most of us have our phones on us a lot of the time, and if you’ve sent her numerous messages, especially messages asking questions, and you’ve heard nothing, it’s time to take the hint. What she’s really saying is basically “I’m too nice to tell you to leave me alone”. It might seem harsh, and you may even be a little mad that she’s ignoring you, but don’t be, move on and find someone who is responding to you.

Rather this approach than be told some harsh home truths, right?